Drop me a note

Drop me a note

And the side effect of learning a brand-new Scandinavian language (at least by osmosis).

These are all the benefits of obsessing over Danish television… and I would know, because I am currently obsessing over Danish television. Yep, it’s early summer and for the second year in a row,  I have fallen hard for a Danish series. You know, the kind of falling hard that involves watching 3-4 episodes nonstop, tearing through an entire season in only a day or two, frantic Googling to see when (if) another season is on the way. (And I tend to find great Danish tv series in May, for whatever reason).
Okay, yes. I said Danish. As in Denmark. And yes, I have been going on and on to everyone I know for the past few weeks that they must watch Danish television, so it was about time I found a place to vent my excitement. My family thinks this is yet another quirky phase and it will eventually pass, but really… trust me (please, because apparently no one else in my life does on this,) Danish television is incredible and you must watch it now.
So I don’t have a phobia of subtitles, and have fallen in love with many foreign films. But I never realized – and I know this will make me sound a tad ignorant, but those of us on this side of the pond get exposed to very little else other than what Hollywood churns out other than the occasional British thing – that there are some amazing television series being made in Scandinavia. Danish television’s biggest worldwide hit has been The Killing, a crime drama, although hot on its heels was Borgen, a political drama revolving around a female Prime Minister and a young woman journalist. Borgen is a show that is sublime in every way possible. For months, I’ve actually wanted to write a blog post about how amazing Borgen was to watch (and re-watch), but have been unable to put my love for this series into words thus far. So I’ll save that for another time.
What I can articulate my love for is the show that caught my eye this spring (and kept me up far too late on work nights): it’s a Danish dramedy (for lack of better term, not sure whether the Danes would approve), called Rita.

Why everyone will love and basically want to be Rita

On the surface, the premise of Rita is simple: it stars a woman (mid-40s*) who is a spectacular teacher in every way and is in this profession for all of the right reasons (to protect children from their parents, as she puts it). The catch? Rita makes every bad decision possible in her personal – and particularly romantic – life. She also tends to be remarkably “bad” in between classes: she smokes, a lot, even on school property. She has liaisons with the principal of the school during the school day in his office… while he answers phones. And she graffitis the bathroom stall (although that is for a noble purpose: to correct a spelling error in a graffitied sentence – that slanders her no less – that was already there).
So, on the surface, Rita is essentially a rendition of the “bad teacher” (with a heart of gold) trope, but there are layers that this show explores that go beyond that surface-level definition of “bad teacher.” In fact, the show actually seems to deepen and come into its own as it goes on: in fact, I wasn’t completely convinced I’d even continue watching the show after the first episode or two, but I continued and found myself enjoying it substantially more with each passing hour. In fact, I found the show’s second season to be better than its first (and I have high hopes for its third season – which is available on Netflix today!)
Although this show has a cliché or two in its storyline, it never feels old or stale, and indeed the way that they decided to explore many of these story choices through the characters and the plot points was so different (and refreshing) that I found the show was impossible to predict and definitely surprised me on several occasions.
Another major facet that this show has in its favor is that she is supremely likeable. Even though Rita is self-destructive in many ways, you never hate her for the choices she makes – because she owns them. In fact, one of my first thoughts, after watching the first episode, was that she was the type of character I’d never really connected with before, much less wanted to watch a show about. Rita seems like she should be the know-it-all badass character who is too cool for school and who ends up being a colossal screwup instead. A kind of character you hate to love (or love to hate). But this isn’t the case. Rita is saved from being pigeonholed in this box by the show’s twists and turns and overall good writing and the superb acting choices by Mille Dinesen, who plays the titular character.
I first saw Dinesen in “Borgen”: she had a small story arc on that show as a woman whom the audience should also not have, in theory, liked, but she ended up being reasonably likable. I am not sure what it is about Danish actresses that allows them to accomplish this so well, but they truly bring a layer of empathy and depth to their characters. Despite being drop-dead gorgeous (tall, blonde, Scandinavian, you get the idea), she’s so easy to relate to. This is in great part because of the excellent writing: just when you think she’s being too perfect, her insecurities seep through, or we see her in a moment of vulnerability. 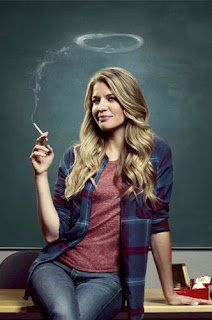 Villain or hero? Sinner or saint? It’s hard to say… and who cares.

It’s also the little choices that I think make all of the difference about how we get to know the character: her body language, expressions and how they become a larger part of how we perceive Rita. The way she connects with her children on screen, or her students, and how she handles all of those awkward little moments in life are all pretty important to this show. You get these bits in the episodes where you see how she feels when she’s alone at night on her couch, or walking to and from work, or waiting for someone, or just taking a cigarette break and pondering what the hell just happened to her. It’s that, I think, those little moments that are sometimes weird and awkward, that make a character like Rita so easy to relate to.
She’s also someone who is not 100% a protagonist – sometimes, she very clearly makes the wrong choices. She tends to have self-destructive behavior. Occasionally her choices are even problematic. She has had her bad teacher moments (as well-intentioned as they may have been). It’s this duality – is she a villain, is she a hero? – that makes the character so compelling.
One thing I really like about Rita is that she sees people for who they are, and knows when they are genuine or faithful. (Of course, she doesn’t always reward them for that; she’s a tad too selfish, and besides, that would make her too perfect.) In the first episode, she meets a new, very green teacher, Hørdis, and takes her under her wing. And even though the new teacher is a little odd, is very naive, and bizarrely serenades Rita was old Scandinavian poems, Rita is never judgmental and treats her as an equal colleague. Instead, she reserves her vitrol for a character that she supremely dislikes: a prissy guidance counselor who has an inflated sense of self and an almost Dolores Umbridge-esque demeanor. Rita can see right through her saccharine exterior, and these two women do spar throughout the series which culminates in a predictable, but shocking, climax. Yet, there’s nothing demeaning about how they verbally spar, and they are able to maintain a professional façade for the workplace (saving the show from going into ridiculous territory).

The men on this show are emotional and sensitive (well, some of them are, definitely not all,) and the women are sometimes hardened, abrasive, even. It’s definitely a reflection of Scandinavia’s post-feminist climate. In fact, Rita is everything that most smart, funny and/or powerful female protagonists on American television are not (and in fact it almost seems ridiculous to compare the two): she is sexually promiscuous, but accountable for her actions, never needing to be “punished” for her sexual choices and never having a story that highlights her sexuality as something unusual or devious. Cheeky, maybe (there are endless shots of Rita’s perfect derrière to emphasize that), but none of her overt sex appeal is ever labelled or implied as being “wrong” by the show. Indeed, Rita holds herself accountable and seems very aware of every (often bad) sexual devision she makes.
Speaking of sexuality, as another example of the type of plot “Rita” explores, in the pilot episode her youngest son, Jeppe, is grappling with an emerging realization that he is gay. Although the first episode of the series revolves around this plot point, it’s handled differently than one might expect. There is no huge coming out party (his family insist they already knew), he simply comes to that conclusion, declares it out loud, and his mom kisses him on the top of his head. There’s no big, special, tearful celebration or moment, it really just is.
Rita is also a mother with a tenuous, but mostly loving, relationship with her kids, who are remarkably stable (or crave stability) and “normal” in the ways that Rita is not. This is another plot point explored in an early episode, “The Anarchist.” In fact, the episodes are designed loosely to explore a different aspect of her personality, and how that aspect of her personality (for instance, her firmly anarchic qualities), impact those around her.

The show has many light moments, but doesn’t shy from the dark and dirty details of life. To avoid spoilers, I won’t go into detail, but at one point Rita must make a choice about something that no protagonist/main character on an American television show would do because it would be too controversial for primetime tv on this side of the pond.

Grab the popcorn and queue it up

In case you couldn’t tell by this ridiculously long post, I really did get so involved with this television show and it’s just so bingeworthy (as long as you can push yourself through the first few episodes at least) that you’d be missing out to not give it a chance. I don’t think I’m alone in this: I read that Netflix helped fund the 3rd season (which recently aired in Denmark and is out TODAY!) because the show was so popular worldwide. Go watch it so they (hopefully) decide to go ahead with another season!

*I didn’t know where to fit this comment in but I just have to stop for a second and admire how amazing it is that women who lead shows in Denmark (in both Rita and Borgen) are 40-somethings. Not 20-somethings. Not that I have anything against women in their 20s (in fact, I’m barely into my 30s so that would be hypocritical), but American television is a hostile, hostile world when it comes to representing women beyond the age of 25.